Global Oil & Gas: Eni to spend over $1 billion a year on exploration

Italian oil company Eni expects its production to increase by 3.5% per year over the next four years with plans to invest €900 million ($1.1 billion) per year on exploration activities and discover two billion barrels of new resources.

Eni CEO Claudio Descalzi on Tuesday presented the company’s 2018-2021 Strategic Plan to the U.S. financial community. The strategy builds on the transformation which started in 2014.

In his speech, Descalzi noted that over the past four years and in a period of very low prices Eni increased its hydrocarbon production and restructured mid-downstream businesses to achieve positive structural results after years of losses, all while generating substantial cash and reducing costs and investments.

Eni boss continued: “We are now entering a new phase of expansion, which will allow us to further strengthen the company and increase value for our shareholders. Our strategy is based on a deep integration of all our businesses and a continued focus on efficiency and strict financial discipline.

“Over the next four years, we expect production to increase by an average of 3.5% per year and to discover two billion barrels of new resources. Based on the trend in first quarter, with a 4% growth year on year we are perfectly in line with our previously announced growth target for 2018.

“In the Gas & Power business we will increase EBIT to 800 million euros in 2021, generating 2.4 billion euros of free cash flow over the Plan period.”

Descalzi also added: “Over the next four years, we expect total cash flow from operations to continue to grow while we hold capital expenditures flat compared to the previous Plan.”

Lastly, Descalzi said Eni is  implementing a deep digitalization process throughout all activities.

“This will allow by the end of the Plan period a 7% reduction of production costs, a 30% decrease in unproductive time during operations, and a 15% reduction in execution of exploration activities.

“By the end of the Plan period we expect to be able to cover our capital expenditures and dividends at a Brent price of $50 per barrel, further strengthening our portfolio and accelerating value creation for our shareholders.”

Details of Eni’s Strategic Plan include enhancing the upstream business through its dual exploration model and the new development model.

Elaborating on the success of is two- pillar strategy, Eni said that, since 2013, the dual exploration model has allowed the company to generate €10.3 billion of organic cash flow. In the same time frame, the new integrated development model has allowed Eni to enhance, through the new development projects, approximately 40% of the 4.4 billion barrels of oil equivalent (boe) discovered over the last four years, generating a net present value of approximately 9 billion dollars.

Over the past three years, Eni has begun production on most projects ahead of schedule. Eni attributed a major part of this success to its integrated model of exploration and development, allowing the company to reach record average production of 1.816 million boe in 2017, while reducing Capex by 40% compared to 2014.

Over $1 billion per year on exploration

During the four-year Plan, Eni will spend €900 million per year on exploration activities, targeting approximately 2 billion boe of new equity resources at approximately $2 per barrel and continuing to implement its dual exploration model. The company will leverage its renewed exploration portfolio – which is equal to 100 million acres, almost three times 2013 levels – with a net risked resources potential of 10 billion boe.

Production in 2018 is expected to increase 4% from 2017. This figure, which is above original guidance, takes into account the recent entry into the United Arab Emirates and the sale of 10% of Zohr. Eni’s strong asset base allows the company to target an annual average production growth rate above 3% for the long term, reaching more than 2.3 million boe per day by 2025.

Eni expects upstream growth to continue to generate barrels with ever higher margins and the sector’s Capex cash neutrality to drop to approximately $40 from 2018. Eni expects the upstream sector will generate approximately €22 billion of free cash flow during the Plan period.

Eni noted that its transformation and restructuring of the mid-downstream businesses has had positive results, increasing operating cash flow by €12 billion in the period 2015-2017, compared with the previous three years.

The Gas & Power sector achieved in 2017 a structural positive result. In this sector, Eni has successfully pursued the renegotiation of long-term gas supply contracts and almost fully recovered the take or pay contracts.

Eni claims that the Gas & Power sector will continue to grow due to three fundamental actions: The accelerated development of the LNG portfolio, which is set to reach 12 million tons per year in contracted volumes by 2021 and 14 million tons by 2025, and through equity enhancement, which is due to rise from 30% in 2017 to 70% in 2021; improved profitability of the gas portfolio in Europe; and retail sector growth in Europe, with a forecast of 11 million customers by 2021, an increase of 25% compared with 2017.

The four-year investment plan, which is focused on high-value projects with rapid returns, envisages capital expenditure of less than €32 billion – essentially unchanged from the previous Plan – of which more than 80% will be invested in the upstream sector.

For 2018, the company lowered its guidance to €7.7 billion to reflect recent entry into the United Arab Emirates, the sale of an additional stake in Zohr and other optimization measures.

According to Eni, the solid productive growth projected for the next four years is supported by the ramp-up of the fields that entered production in 2017 and by production from five projects for which the final investment decision (FID) is expected by the end of 2018.

The investment strategy envisaged by the Plan is highly flexible, with an average of approximately 50% of expenditure not yet committed in 2020 and 2021.

In 2018, with the price of Brent at $60/bl, Eni expects to generate an operating cash flow of more than €11 billion, before changes in working capital. That is set to increase by more €2 billion in 2021 in the same scenario; with Brent at $70/bl, cash generation in 2021 would increase by a further €2 billion.

Due to the results achieved to date and the strength of the current Plan, Eni recently announced a 3.75% increase in the 2018 dividend to €0.83 per share, paid entirely in cash. Going forward, the dividend distribution policy will be progressive and linked to growth in the underlying results and the company’s free cash flow. 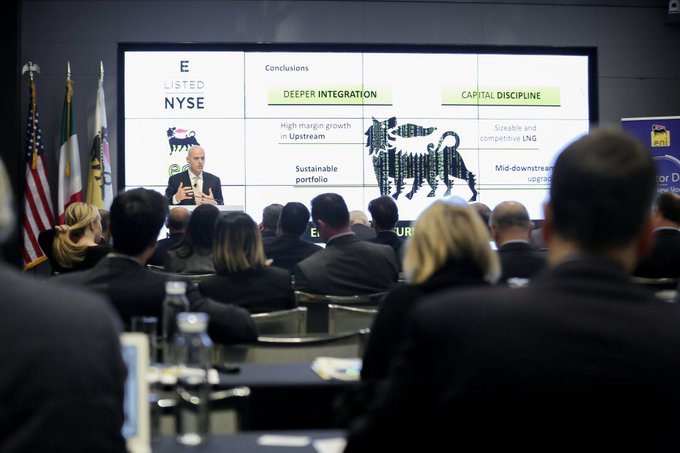 CEO Claudio #Descalzi shares the company’s 2018-2021 plan with the US financial community. Production growth target for 2018 confirmed on the basis of the trend in first quarter. http://bit.ly/2H9ralI #SetforGrowt