Devaluation is the word of the day in oil exporting countries. Whether it is the Nigerian naira, the Venezuelan bolívar, or the Russian rouble, low oil prices are wreaking havoc in oil exporting economies and on their national currencies, according to In most cases the scenario is similar: over the past decade, oil exporting countries used excessive revenues from oil to expand public services, or simply pursue populist policy in order to buy political stability. Once oil prices started to fall, the budgets did not shrink accordingly, which created a wide gap between the oil revenues and swelling fiscal demands.

In order to stem the rapid outflow of foreign reserves, the governments were forced to devaluate their national currencies. An unwanted consequence is almost always the rise in inflation and household prices, along with a decline in living standards and stalled economic growth. 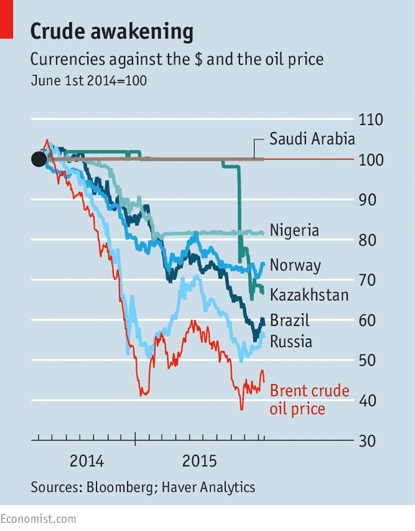 GRI presents five countries most affected by this devaluation trend.

The former Soviet republic is the first country to request a $4 billion emergency loan from the IMF and the World Bank in order to cover losses caused by low oil prices. Although the Azerbaijani government officially denied the need for a bailout, the country is in dire straits: income from oil and gas makes up around 75% of the country’s revenues, and the recent devaluation of the national currency manat by more than 30% incited public protests that might easily disrupt the political stability of the authoritarian regime of president Ilham Aliyev.

Venezuela has gone through an equally depressing scenario since July 2014. Although the country’s economy wasn’t sustainable even with triple digit oil prices, a prolonged period of low oil prices brought the economy close to a breaking point. Over the past two years, the national currency, the bolívar, lost more than 90% of its value. According to the IMF’s forecast, inflation will reach 720% in 2016.

Venezuela’s domestic woes are further aggravated by the government’s efforts to limit imports in order to raise enough cash to stave off default.

There is, however, an increasing danger that with a further slump in oil revenues, and with sovereign bonds yielding at around 30%, Caracas might default on its debts at some point in 2016. The real question is, how long will the Maduro regime be able to suppress the growing social discontent and increased pressures from the opposition-controlled parliament?

Africa’s largest economy was hard hit by the falling oil prices. The national currency, the naira, dropped against the dollar by 25% over the past year. On January 30, the Nigerian government requested a $3.5 billion loan from the IMF and the African Development Bank to plug its $15 billion budget gap.

Angola earned around $500 billion from oil exports between 2000 and 2014. But today the country’s economy is among the hardest hit in Africa. Inflation is at 14% and the national currency, the kwanza,devaluated by more than 50% since January 2015.

The country earns 75% of its fiscal revenues from oil exports, which make up around 95% of total exports. As a consequence, Jose Eduardo dos Santos’ regime is starting to feel the pressure from well-organised public protests that might turn into more widespread unrest if the economic situation continues to worsen.

Russia is going through some tough economic times, as the toxic combination of Western sanctions and low oil prices is devastating the country’s economy and living standards. Since June 2014, the roubledevaluated by more than 100% against the dollar. GDP is expected to shrink by 3.7% in 2016 alone.

How do these numbers affect the everyday lives of average Russians? Real wages fell by almost 10% in 2015, and the percentage of households that cannot afford sufficient food or clothing has increased from 22% to 39% over the previous year.

Although Russia is not an average developing, oil-exporting country, the severity of Russia’s economic and potential political troubles, which might come along with the low oil prices, puts the country well inside this infamous club.

These five countries are already feeling the effects of low oil prices and devaluation. And there are more candidates: Brazil, Ecuador, and even the rich Gulf countries are starting to feel the pinch, and it seems that the end to depressed oil prices is nowhere near.(Source: By Ante Batovic, from GRI – Global Risks InsightsGRI – Global Risks Insights)